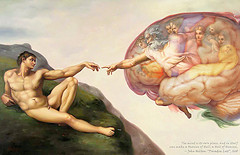 An Italian Renaissance painter, sculptor, poet, and architect – those are the reasons why Michelangelo Buonarrotti is one of the best artists of all time.

Michelangelo Buonarrotti got his formal education from Bertoldo di Giovanni, a sculptor, and Domenico Ghirlandaio, a painter. His knowledge in Classical antiquity, which he got in Florence, greatly influenced his works. Buonarrotti was able to meet some of the best scientists of his generation because of Lorenzo de’ Medici.

He transferred to Rome in 1496. The first assignments that he received involved the making of St. Peter’s basilica’s sculpture called “Pieta”. He also created other masterpieces back in Florence, like “David”, which you could see in Academia.

From 1508 to 1512, Buonarrotti was commissioned by Pope Julius II to decorate the ceiling of the Sistine Chapel with frescoes that showed sibyls, scenes from the book of Genesis, and prophets. This specific work of Buonarrotti showed his preference for figures that are muscular and strong. He lay low with painting until 1536, when he began painting the “Last Judgment” on the Sistine Chapel’s back wall.

This famous artist died in 1564 in Rome and was buried in Florence.

There is no doubt that Buonarrotti inspired a lot of artists from his generation onwards. Here were some of his famous works:

“The true work of art is but a shadow of divine perfection”, that is one of Buonarrotti’s famous quotes. Even when he was still alive, he was already renowned and famous. However, this fame did not seem to bring him joy for he was known to have lived his life with misery and pessimism.